Arizona is ready to turn blue

In our Arizona plan, we noted it is “perhaps the most flippable state in the country.” Last night’s results confirm this.
Abby Witt & Mónica Pérez 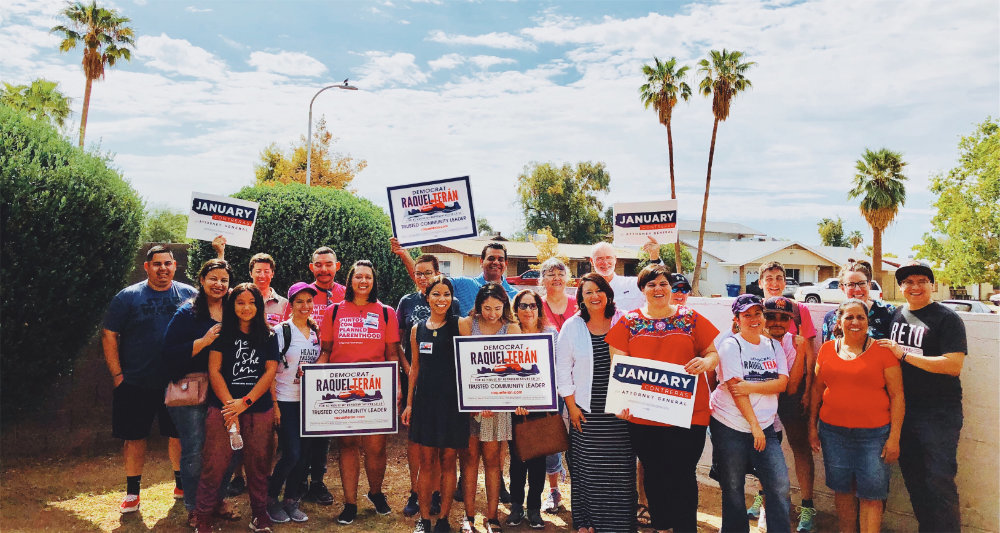 Earlier this year, we shared our plans to invest heavily in Arizona. In our plan, we noted that Arizona is “perhaps the most flippable state in the country.” Last night’s results confirm this.

While results are still coming in, Arizona is set to break an all-time high for voter turnout. That’s big news, but especially important considering midterm elections usually come with lower turnout numbers. Voters also pushed a record number of women candidates forward, and made it clear that money isn’t going to buy this election: from the governor’s race to state legislative races, organizing prevailed over late cash infusions.

And each of our Arena PAC Fellows won their primary elections. Congratulations to David Garcia and Raquel Terán on their contested primary victories, and to January Contreras who joins them as all three move on to the General Election.

We are proud to support them, not only as the next generation of leaders in Arizona, but as models for politicians everywhere. In the face of overwhelming negative spending by their Republican opponents (yes, already), these candidates are doing the hard work to build grassroots communities, and giving all Arizonans something to vote for.

Our work in Arizona is far from over. These candidates, plus many others, face Republican incumbents with deep pockets and institutional support built over decades of GOP domination. That’s why we’ve taken a comprehensive approach to Arizona, working with statewide candidates and as a vendor with the legislative caucus to support more than a dozen campaigns up and down the ballot, online and on-the-ground, and to build capacity everywhere. There’s never been a chance like this: in 10 weeks we can flip the Governor, the Attorney General, the State House and the State Senate — but it’s going to take all of us.

Learn more about our work with individual candidates, as well as our crucial work to flip the state house and senate with the Arizona Democratic Legislative Caucus Committee.

With such a short window between now and November 6, these candidates need our help to win. Visit their websites, and learn how to pitch in your time and resources to help them win.Meet the Candidates

David Garcia is a husband, father, teacher, and veteran, not a politician. He’s a working-class kid from Mesa who enlisted in the U.S. Army. He’s running for governor to end the crisis in our schools, stamp out corruption, and make the economy work for all of Arizona. He’ll invest in education to create good jobs, and he will make the wealthiest and corporations pay their fair share.

David knows what it’s like to struggle and understands the daily challenges Arizonans face. His dad was a commercial painter and Vietnam-era veteran and his mom juggled parenting along with a job at an electronics factory to help make ends meet.

At 17, David enlisted in the U.S. Army Infantry. David was an expert marksman and received the Army Achievement Medal and the Humanitarian Award for fighting wildfires in Yellowstone National Park.

After the Army, David attended Arizona State University on the G.I. Bill, then continued his education, receiving his Doctorate in Education from the University of Chicago. He helped lead the Arizona Department of Education as Associate Superintendent, earning a reputation as a leader who found common ground, smart solutions, and built consensus. As a professor at ASU, and with his second book being published this year by M.I.T. Press, David is the person most capable of tackling the crisis in Arizona’s schools.

Today, David is married to his high school sweetheart, Lori, and together they have two daughters, Lola and Olivia, who attend public schools.

January Contreras has dedicated her career to protecting Arizonans. As a Deputy County Attorney, Assistant Attorney General, founder of a not-for-profit and, most importantly, as a mother to two children, January has always been driven to protect others.

January is a fourth-generation Arizonan and the daughter of postal workers. She attended the same school as her mother, Ann Ott Elementary School in Phoenix, before moving to Mesa and graduating from Westwood High School. She went on to earn her undergraduate and law degrees from the University of Arizona in Tucson. January was a county and state prosecutor before founding a legal aid organization, so kids and young adults who have survived trauma, homelessness, and the foster care system have access to lawyers who will fight for them. January previously served as the Interim Director of the Halle Center for Family Justice, and before that she accepted an appointment in Washington, DC as the nation’s Citizenship and Immigration Services Ombudsman. January also served as a Senior Advisor to Secretary Janet Napolitano and as a designee to the White House Council on Women and Girls.

January recently celebrated her 23rd wedding anniversary, and is the proud mother of two teenage sons.

As a native Arizonan, mother, wife, and community advocate Raquel understands the value of hard work, listening to the needs of others, and never giving up in fighting for those needs. Raquel serves as the Campaign Director for ISTANDWITHPP, a campaign fighting to protect Affordable Healthcare and women’s reproductive rights.

For the last twelve years, Raquel has been a vocal and active community advocate for civil, labor, immigrant, and women’s reproductive rights, mobilizing Arizonans through civic engagement and community organizing. Her efforts were used to rally against the injustices faced at the hands of former Maricopa County Sheriff Joe Arpaio and SB1070 author, State Senate President Russell Pearce – resulting in Pearce’s recall and Arpaio’s reelection defeat.

She recently was the Regional Director of Mi Familia Vota’s Education Fund, committed to increasing civic participation through grassroots mobilization. Currently, Raquel serves on the Board of Chicanos Por La Causa, a nonprofit dedicated to improving the quality of life for Arizona’s population through housing, education and workforce development.